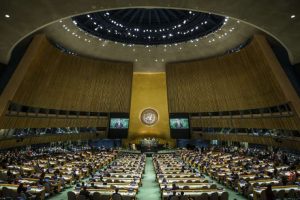 New York City, N.Y., Sep 24, 2019-CNA—President Donald Trump and Vatican Secretary of State Pietro Parolin have challenged world leaders to protect unborn human life. Both leaders spoke at the United Nations in New York, as the body met for the 74th session of its General Assembly.

On Tuesday, President Trump stated that “like many nations here today, we in America believe that every child, born and unborn, is a sacred gift from God.”

“We in #America believe that every child, born and unborn, is a sacred gift from #God” — @POTUS speaks out against attempts by the @UN to assert a global right to taxpayer funded #abortion. #UNGA #ProLife pic.twitter.com/2rxODRrBRG

The President defended the right of countries to establish protections for unborn human life, noting that there are international efforts to promote taxpayer-funded abortion-on-demand.

Trump’s comments followed a high-level meeting on universal health coverage at the UN on Monday, at which both Cardinal Parolin and U.S. Secretary of Health and Human Services Alex Azar insisted on the protection of unborn life as part of a global commitment to health care.

Parolin and Azar made their remarks at the adoption of a political declaration on universal health coverage intended to set the tone for future investment in health care by UN member countries and donors in light of the 2030 UN Sustainable Development Goals (SDG).

Parolin, the Vatican’s chief diplomatic officer, warned against wording in the document that could be interpreted by member countries to promote abortion access. A joint statement by the U.S. and 18 other countries, read by Secretary Azar at the meeting, also opposed the same language.

Parolin said that the Holy See rejects any inclusion of abortion in the understanding of health care rights.

“In particular, the Holy See rejects the interpretation that considers abortion or access to abortion, sex-selective abortion, abortion of fetuses diagnosed with health challenges, maternal surrogacy, and sterilization as dimensions of these terms, or of universal health coverage,” Cardinal Parolin said.

He reiterated the Holy See’s previous reservations over such language, as published at the 1995 World Conference on Women in Beijing and the 1994 Cairo Conference on Population and Development, that it would be interpreted to advocate for abortion access.

The language of “‘reproductive health’ and related terms” is considered by the Holy See “as applying to a holistic concept of health, which embraces the

person in the entirety of his or her personality, mind and body,” Parolin said, but it does not include abortion as part of this concept.

Monday’s meeting marked four years since the UN’s adoption of Sustainable Development Goals (SDG), a comprehensive global agenda for 15 years until 2030 that included targets such as fighting poverty and promoting universal education.

At that time, some critics warned that the language would allow for a vast expansion of international abortion access, which would use development grants as leverage to pressure developing countries to liberalize their abortion laws.

The Holy See, the U.S., and other countries have consistently warned against such attempts to coerce countries on abortion. In the months before the 2019 UN meeting on universal health coverage, the Trump administration has been working to enlist support to defend the ability of states to protect life free from international interference.

21 Countries so far have signed letter to support unborn

That work included a letter from Secretary of State Mike Pompeo and Azar to leaders of other member states. So far 21 countries, including the U.S., have signed the letter in support, according to the HHS.

“As a key priority in global health promotion, we respectfully request that your government join the United States in ensuring that every sovereign state has the ability to determine the best way to protect the unborn and defend the family as the foundational unit of society vital to children thriving and leading healthy lives,” the letter states.

“The latter has been asserted to mean promotion of abortion, including pressuring countries to abandon religious principles and cultural norms enshrined in law that protect unborn life,” the letter states.

The joint statement says that “the family is the foundational institution of society and thus should be supported and strengthened.”

The statement goes on to oppose “references to ambiguous terms and expressions, such as sexual and reproductive health and rights in U.N. documents, because they can undermine the critical role of the family and promote practices, like abortion, in circumstances that do not enjoy international consensus and which can be misinterpreted by U.N. agencies.”

“There is no international right to an abortion and these terms should not be used to promote pro-abortion policies and measures.”

Parolin, in his remarks on Monday, also said that the universal right to health care is a part of the Church’s teachings on solidarity, social justice and the common good.

Furthermore, he said, it “is understood as comprising the health of the person as a whole and of all persons during all stages of development of their life.”

This right, the cardinal said, “is thus inextricably linked with the right to life and it can never be manipulated as an excuse to end or dispose of a human life in whichever point in the entire continuum of his or her existence, from conception until natural death.”