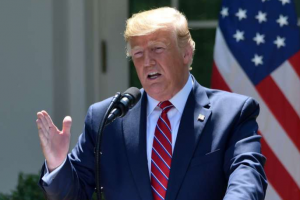 CNA—President Donald Trump on Wednesday announced an executive order that would require medical care be given to infants who are born alive after failed abortion attempts.

“Today I am announcing that I will be signing the Born-Alive Executive Order to ensure that all precious babies born alive, no matter their circumstances, receive the medical care that they deserve. This is our sacrosanct moral duty,” said Trump Sept. 23, speaking in a pre-recorded video address during the National Catholic Prayer Breakfast virtual event.

The Born-Alive Infant Abortion Survivors Act has been introduced several times in Congress, but has failed to become law. The bill stalled in the House of Representatives in 2019-2020 because an insufficient number of members signed a discharge petition which would have triggered a vote on the bill.

The proposed law would not have created any new limit or restriction on access to abortion, but would require that infants born alive after an attempted abortion be given appropriate medical care consistent with that given to a child of the same gestational age born under a different circumstance. Several states have passed their own version of the bill.

The full text of the executive order has yet to be released, but is expected to mirror the attempted federal legislation on the issue.

Trump also announced that his administration would be “increasing federal funding for neonatal research, to ensure that every child has the very best chance to thrive and to grow.” September is Neonatal Intensive Care Unit Awareness month.

The National Catholic Prayer Breakfast had been rescheduled from March 30 due to the ongoing coronavirus pandemic and was held as an online broadcast. This was Trump’s first time speaking at the event, although administration officials, including Vice President Mike Pence and former acting White House Chief of Staff Mick Mulvaney, have addressed the breakfast in past years.

“I want to express my deep gratitude everyone who prays for me, for the First Lady, and for our great country,” Trump said.

The president also spoke of how he grew up near a Catholic church in the New York City borough of Queens, and had seen for himself the “incredible work” the Church does for the marginalized.

“I grew up next to a Catholic church in Queens, New York and I saw how much incredible work the Catholic Church did for our community. These are amazing people. These are great, great people,” the president said.

“Catholics of all backgrounds share the love of Christ with the most vulnerable, as they care for the elderly, the homeless, and neighbors in need. Our nation is strong because of Catholics and all people of faith,” he added.

Leo also praised Trump’s commitment to life issues. The president has taken an active and vocal stance in opposition to abortion; he become the first sitting president to address the March for Life earlier this year, has prohibited domestic abortion providers from receiving some federal funds, and has announced plans to expand the Mexico City policy that prohibits federal foreign aid from being given to organizations that promote or perform abortions.

The president’s administration has garnered praise from the U.S. bishops’ conference for those efforts, while facing criticism from them for ending a moratorium on the federal death penalty, and authorizing the executions of several inmates in recent months.

The virtual event featured a keynote address from Bishop Robert Barron, auxiliary of Los Angeles, and the conferral of the annual Christifideles Laici Award to Attorney General Bill Barr.