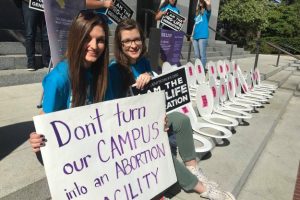 Reacting to the news that Governor Jerry Brown vetoed SB 320, Kristan Hawkins, president of Students for Life of America stated, “Today’s veto is a victory for all women, students, and taxpayers in California. Students for Life of America is proud to have worked alongside other pro-life groups in California to protect students from the dangerous RU-486 abortion drug. The Pro-Life Generation will continue to fight against all efforts to bring dangerous abortion drugs to college campuses.”

Students for Life of America, the nation’s largest pro-life student organization, with over 1200 groups on high school and college campuses across the country, and more than 90 groups in California, has held numerous rallies and information tables on campuses, and met with university administrators, as well as lobbied and testified in Sacramento against California State Senate Bill SB 320.

You can read Kristan Hawkins’ op-ed in The Federalist about SB-320 here.