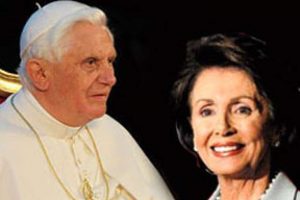 Receives Speaker of the House Pelosi in Audience

VATICAN CITY, FEB. 18, 2009 (Zenit.org).- Benedict XVI is urging legislators to uphold the sanctity of human life according to Church teaching, he affirmed in a meeting with U.S. Speaker of the House of Representatives.

The Pope received Nancy Pelosi and her entourage briefly today after the general audience, reported a Vatican communiqué.

He “took the opportunity to speak of the requirements of the natural moral law and the Church’s consistent teaching on the dignity of human life from conception to natural death,” the Vatican reported afterward.

The Pontiff added that these teachings “enjoin all Catholics, and especially legislators, jurists and those responsible for the common good of society, to work in cooperation with all men and women of good will in creating a just system of laws capable of protecting human life at all stages of its development.”

In a statement today from Pelosi’s office, she said that in the meeting she lauded “the Church’s leadership in fighting poverty, hunger and global warming, as well as the Holy Father’s dedication to religious freedom and his upcoming trip and message to Israel.”

The meeting comes after Pelosi’s erroneous remarks on a television interview last August. When asked to comment on when human life begins, she responded that as a Catholic, she had studied the issue “for a long time” and that “the doctors of the Church have not been able to make that definition.”

They, and other bishops, issued public statements clarifying the Church’s position. They cited the teaching of the Catechism of the Catholic Church: “Since the first century the Church has affirmed the moral evil of every procured abortion. This teaching has not changed and remains unchangeable. Direct abortion, that is to say, abortion willed either as an end or a means, is gravely contrary to the moral law.”

Archbishop George Niederauer of San Francisco, which is Pelosi’s home diocese, invited her for a private meeting in September.

Meanwhile, two other Catholic congressmen, John Boehner and Thaddeus McCotter, wrote a letter Tuesday to Cardinal Rigali. They thanked him for his Feb. 5 letter to all members of Congress in which he urged legislators to uphold existing pro-life laws and refrain from forcing taxpayers to fund abortions.

The legislators’ letter, released to the public, read “We stand with you in the defense of all human life and look forward to working with you.”

It continued: “We are committed to working with our pro-life colleagues on both sides of the aisle to proactively defeat efforts to enact the so-called Freedom of Choice Act (FOCA) or any similar measure. We are similarly committed to working to retain, and not weaken, laws that prohibit using federal funds for the purpose of promoting or funding promotion of abortion. […]

“We will, as Pope Benedict XVI exhorted during his apostolic visit to the United States last year, ‘proclaim the gift of life, to serve life, and promote a culture of life.'”