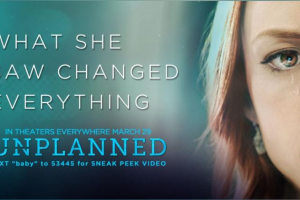 CNA—A movie chronicling the conversion of a former Planned Parenthood clinic director who became a pro-life advocate will be released in theaters nationwide on March 29.

A trailer for the film Unplanned, which tells the story of Abby Johnson, was released on Thursday.

Based off Johnson’s book of the same name, Unplanned recounts her experiences in the abortion industry. After being first approached at an on-campus activities fair, Johnson began volunteering at Planned Parenthood as a clinic escort. After graduation, she took a job with the company and eventually became the director of the Bryan, Texas clinic. In 2008, she was named as the clinic’s employee of the year.

During her time working at the nation’s largest abortion provider, Johnson herself had two abortions.

Due to a personnel shortage, she was called in to assist in an ultrasound-guided abortion for the first time in September 2009. She was initially disconcerted to note how much the unborn child, after 13 weeks, looked like the image she had seen of her own living daughter while pregnant.

The next few minutes changed Johnson’s life irrevocably, as she watched the baby –whom she had believed to be incapable of feeling anything– squirming and twisting to avoid the tube into which it would be vacuumed.

“For the briefest moment,” she wrote in her memoir, “the baby looked as if it were being wrung like a dishcloth, twirled and squeezed. And then it crumpled and began disappearing into the cannula before my eyes.”

“The last thing I saw was the tiny, perfectly formed backbone sucked into the tube, and then it was gone.”

Shocked by what she had seen, Johnson still continued her work running the clinic and promoting its work, at first. Just a few weeks later, however, she was in the nearby office of the Coalition For Life, telling its director Shawn Carney –with whom she knew from his years of opposition to Planned Parenthood–  that she could no longer continue helping women have abortions.

In a 2011 interview with CNA, Johnson said she joined the pro-life movement to help women understand the truth about abortion, not to become a public figure. She  said that it was Planned Parenthood, not the Coalition For Life, that turned her departure into a public battle.

Johnson went on to found the organization “And Then There Were None,” which seeks to assist abortion workers with leaving the industry and finding a new career. Although not shown in the film, Johnson and her husband subsequently converted to Catholicism and are currently  expecting their eighth child.

And Then There Were None has helped nearly 500 former clinic workers leave the abortion industry.

Unplanned stars Ashley Bratcher as Johnson. During filming, Bratcher discovered that her own mother had planned on having an abortion when she was pregnant with her, but walked out of the appointment instead.

Unplanned was written and directed by Chuck Konzelman and Cary Solomon, the writers of God’s Not Dead and God’s Not Dead 2. The movie was partially funded by Michael Lindell, a born-again Christian and the founder of the company MyPillow.

The film will be distributed by Pure Flix.