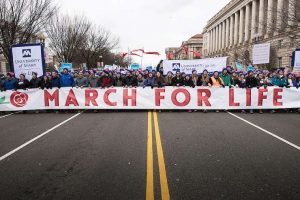 WASHINGTON, D.C.  (CNA/EWTN News)—The 45th annual March for Life will take place in Washington, D.C. on Jan. 19, and hundreds of thousands of people are expected to attend. Many of the marchers will be students from Catholic universities, who will, in some cases, skip class to march for an end to abortion. Here are some of the schools that will be well-represented at Friday’s march:

Nearby Christendom College, cancels all scheduled classes on the day of the March for Life, so that all students and faculty are able to attend. Christendom is located in Front Royal, Virginia, about an 80 minute drive from the National Mall. Christendom students have attended each March for Life since the school’s founding in 1977.

Franciscan University of Steubenville, which also cancels day classes on the day of the March, will send roughly a quarter of its student body–about 500 students–to the March for Life this year. In a press release, the school said that they will be sending eight busses on the five-hour journey to DC, with additional students and alumni making the trek on their own.

The University of Notre Dame likely is the winner of the sheer numbers game. The school says it is preparing to bring over 1,000 people from the greater Notre Dame community–including students from nearby St. Mary’s College and Holy Cross College, graduate students, and faculty–to Washington, D.C. for the March. In 2017, there were about 700 Notre Dame students at the March.

North Dakota’s University of Mary, which led the marchers at the 2017 March for Life, also will send a contingent of students on the two-day drive from Bismarck to the nation’s capital. In 2016, the group from North Dakota was trapped in the snow for over 16 hours, which resulted in a “snow Mass” that went viral on the internet. About 145 students, faculty, and staff will attend this year’s march.

On the other end of the travel spectrum is the Catholic University of America, whose students will only have to take a short metro ride to go to the March for Life. CUA plays host to the Vigil for Life Mass on the eve of the March for Life, and thousands of people descend upon its campus each year in the lead-up to the March. In order to successfully handle the influx of pilgrims, the school has a pro-life hospitality ministry, staffed by student volunteers.