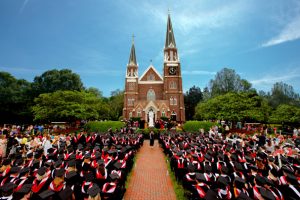 The Cardinal Newman Society (CNS) today sent a letter to EEOC acting chairman Stuart Ishimaru, noting that “it is ironic that the federal agency responsible for protecting against discrimination has so blatantly engaged in an inexcusable violation of religious liberty in its Belmont Abbey ruling.”

CNS also is sending a letter to all Catholic bishops in the United States, informing them of the EEOC action against Belmont Abbey College and highlighting the dangerous precedent this ruling sets to force Catholic employers to include contraceptive coverage in employee health plans.

“No Catholic college or other institution should be required by government to violate the Catholic Church’s clear moral teachings,” said Patrick J. Reilly, President of The Cardinal Newman Society. “The apparently increasing insensitivity to religious beliefs should frighten all employers and employees. We urge religious leaders to stand in defense of Belmont Abbey College.”

In December 2007, Belmont Abbey College removed coverage for abortion, contraception and voluntary sterilization after they were accidentally included in the college’s insurance plan. Eight faculty members filed complaints with the EEOC and the North Carolina Department of Insurance.

“As a Roman Catholic institution, Belmont Abbey College is not able to and will not offer nor subsidize medical services that contradict the clear teaching of the Catholic Church,” said Belmont Abbey President William Thierfelder. “There was no other course of action possible if we were to operate in fidelity to our mission and to our identity as a Catholic college.”

The EEOC determined that Belmont Abbey has discriminated against women by denying coverage of contraception.

Belmont Abbey College has been directed by the EEOC to reach an agreeable resolution with faculty. If this does not happen, Daniels will advise the parties of available enforceable court alternatives.

Belmont Abbey College is included in The Newman Guide to Choosing a Catholic College for its fidelity to Catholic identity and mission. Published by CNS, The Newman Guide is now a free online resource at TheNewmanGuide.com. The next edition will be published in September 2009.