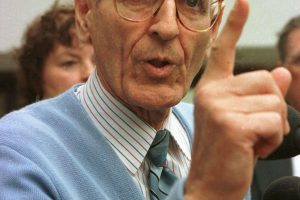 Detroit, Mich. (CNA/EWTN News) — Catholics have responded to the June 3 death of assisted suicide activist Dr. Jack Kevorkian with prayers for him and his victims, affirming the Christian belief in the sanctity of life.

“Left out in much of the commentary on the death of Jack Kevorkian is the sobering and deadly legacy he leaves behind,” Ned McGrath, director of communications at the Archdiocese of Detroit, said in a June 3 statement.

McGrath added, “May God have mercy on his soul and on the scores of confused, conflicted, and, at times, clinically depressed victims he killed.”

Kevorkian, a retired pathologist based in Michigan, said he helped about 130 people kill themselves from 1990 to 1998. He became known as “Dr. Death” even before he began his advocacy and practice of assisted suicide.

He died about 2:30 a.m. Friday at William Beaumont Hospital in Royal Oak, Mich. where he had been hospitalized with kidney and heart problems.

Kevorkian attorney Mayer Morganroth said he apparently died of a pulmonary thrombosis when a blood clot in his leg broke free and lodged in his heart, the Detroit Free Press reports.

“It was peaceful. He didn’t feel a thing,” Morganroth said.

Neal Nicol of Waterford, a friend of Kevorkian who assisted in all but four assisted suicides, said he hopes Kevorkian is remembered “for his work, his courage and his willingness” to help the people who came to him.

“The Catholic Church holds all human life sacred,” McGrath commented. “It is both ironic and tragic that Kevorkian himself was afforded a dignified, natural death in a hospital, something he denied to those who came to him in desperation, only to be poisoned and have their bodies left in places such as vans and motel rooms.”

Kevorkian served eight years in prison after a 1999 conviction for the second-degree murder of 52-year-old Thomas Youk, who had Lou Gehrig’s disease. He was previously charged with murder four times but was acquitted three times and a fourth case ended in a mistrial.

He had videotaped himself injecting Youk and had it broadcast on “60 Minutes.” He was released in 2005 and discharged from parole in 2009.

Kevorkian attracted media attention for his confrontational style and even had a cable television movie made about him, starring the actor Al Pacino.

Morganroth said there were no plans for a memorial.