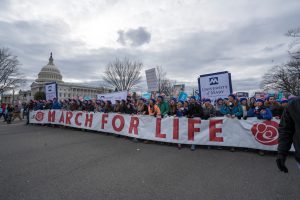 DID YOU KNOW ABOUT THE WHOPPING NUMBER WHO PARTICIPATED IN 2009 MARCH FOR LIFE IN D.C. YESTERDAY?

Washington, D.C.—Estimates of between 150,000 to more than 250,000 — nearly a quarter of a million — college students, young adults, parents, business professionals, bishops, priests, U.S. Congressmen and women, and national pro-ife leaders converged on the nation’s capital for the 36th annual March For Life on Thursday, January 22, 2009.

The March for Life in Washington, DC, commemorates, by prayer, self-sacrifice and renewed commitment to stand up for the unborn, the anniversary of the U.S. Supreme Court Roe v. Wade decision that ushered in nationwide legalized abortion 36 years ago.  Those present gave living witness to the nearly 50 million lives lost to abortion since Roe v. Wade.  Marchers and rally speakers, including U.S. Congressmen, Catholic and Orthodox bishops, Jewish leaders and Protestant   ministers, traveled from across the United States, some at great personal sacrifice, to participate in this year’s March for Life, undeterred by dire predictions of overcrowded area hotels and streets due to the presidential inauguration.

Attendees arrived by bus, plane, car and train, purposefully aware that their presence “spoke” on behalf of those who cannot speak, the most vulnerable and helpless poorest of the poor, as Mother Teresa often referred to unborn children.

Many March for Life participants had attended Barack Obama’s historic inauguration just days before and today they called on the new President to honor his stirring inaugural promise of “equality and happiness for all,” by rejecting the so-called Freedom of Choice Act (FOCA)* that would mandate abortion on demand in all 50 states.  They further called on the President to preserve the long-standing restrictions on the flow of U.S. taxpayer funds to fund abortions to Medicaid recipients from abortion providers such as Planned Parenthood (which already receives more than $270 million a year in taxpayer dollars through government funded grants, according to The Alan Guttmacher Institute).  Lastly, Rally speakers invited the new President to honor his own heritage and civil rights issues by acting to protect today’s most vulnerable members of our society, the unborn.

To see a WELL-DONE  PROLIFE AD that aired repeatedly on Black Entertainment in Chicago and elsewhere during President Obama’s inauguration coverage, Click Here:

To read an ARTICLE by the ACLU on “Public Funding for Abortion,” Click Here