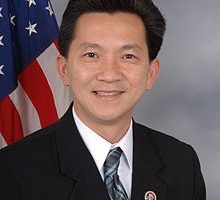 Catholic congressman: I’d rather save my soul than vote for the health care bill

New Orleans, La., August 3 (CNA) .- Rep. Anh “Joseph” Cao, (R-New Orleans-pictured above), the first Vietnamese-American congressman and a Catholic,  announced this past weekend that, because of the “stealth mandate” for abortion still present in the Health Care bill, he prefers to “save his soul” rather than  vote in favor of it.

Cao, the only member of the Louisiana House delegation who had not weighed in on where he stands on the health reform bill, told the Times-Picayune on Saturday that he cannot support any bill that permits public money to be spent on abortion.

“At the end of the day if the health care reform bill does not have strong language prohibiting the use of federal funding for abortion, then the bill is really a no-go for me,” said Cao, who spent time in formation to be a Jesuit priest.

“Being a Jesuit [formed in the Jesuit seminary], I very much adhere to the notion of social justice,” Cao said. “I do fully understand the need of providing everyone with access to health care, but to me personally, I cannot be privy to a law that will allow the potential of destroying thousands of innocent lives,” he explained to the Louisiana newspaper.

The Democratic Congressional Campaign Committee announced that Cao will be one of seven Republican members of Congress targeted with radio ads that will play on radio stations with largely African-American audiences, urging him to support Obama’s health reform efforts.

“I know that voting against the health care bill will probably be the death of my political career,” Cao said, “but I have to live with myself, and I always reflect on the phrase of the New Testament, ‘How does it profit a man’s life to gain the world but to lose his soul.'”

Delivered to your doorstep!!

Or sent at your request to someone else!    click here.

Cao is the first native of Vietnam to serve in Congress and the first Republican to serve in his district since 1890. He won in a district that usually votes overwhelmingly Democratic.

The poorest member of Louisiana’s delegation, and a devout Roman Catholic, Cao served as a board member for Mary Queen of Vietnam Catholic Church’s Community Development Corporation which assists Vietnamese-Americans with hurricane relief, and is a member of the National Advisory Council of the U.S. Conference of Catholic Bishops.

Cao also told the Times-Picayune that he is still undecided about the merits of including a public option in any health reform redesign. He believes that it may ultimately lead to the destruction of the private insurance market and a “government takeover” of health insurance.