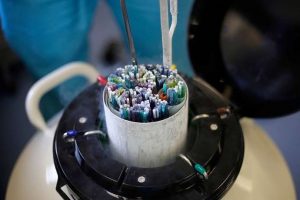 CNA/EWTN—Artificial human reproduction appears to be on the horizon with Japanese scientists’ claim to have created immature human eggs from stem cells, but the technique could result in power that would cross the bounds of ethics and serve as a “profound violation” of marriage and marital love, a bioethicist has warned.

John Brehany, a Catholic bioethicist and director of institutional relations at the National Catholic Bioethics Center, said that adult stem cell research has its positives.

“Such knowledge and power could be used for good ends, achieved with ethical means. For example, scientists could build on this sophisticated expertise in adult stem cell science to create human organs for transplantation or to cure major diseases or industries,” he said.

“However, given the significance of the human desire for procreation, (and) the lust for power, it appears likely that scientists will try to use this technology to engage in truly artificial human reproduction.”

The reported development is “evidence of a major advance in biotechnology prowess” and show the potential for scientists “to exert control over the most fundamental and complex building blocks of biology and life,” he said.

The team of Japanese scientists used a common method to transform adult human blood cells into induced pluripotent stem cells, which have the capacity to become other human cells, National Public Radio reports. They then placed these cells into miniature ovaries created in the lab from mouse embryonic cells. As reported in the journal Science, this triggered the human stem cells’ transformation into immature human egg cells.

The scientists said they next plan to make mature human eggs and produce human sperm using this method.

“It’s the beginning of a paradigm change,” Kyle Orwig, a professor in the department of obstetrics, gynecology and reproductive sciences at the University of Pittsburgh School of Medicine, told NPR.

Brehany thought it correct that the technique might change how humans reproduce.

“This would be a major change even if practiced only by a small group of individuals. In principle, this would be a profound violation of marriage and marital love,” he said.

The technique might be a choice for those who are infertile, NPR reported. It might allow babies to be conceived from the cells of children, grandmothers, the deceased, or cells stolen from unwitting celebrities. It could make DNA scanning of human embryos routine.

According to Brehany, it is important to note that the proposed techniques’ use for infertile couples or individuals is not a cure for infertility, just as surrogacy is not. “Rather, it would allow people to procreate through other means,” he added.

He suggested that news reports on the new development do not sufficiently acknowledge how many human embryos would be “killed by being discarded or would be subject to additional assaults on their dignity by being made the subject of lab testing.”

Dartmouth bioethicist Ronald Green told NPR there are “some very weird possibilities emerging,” such as babies conceived using cells from the blood, hair, or skin cells of children, grandmothers or the deceased. Unwitting celebrities could have their cells stolen from a used soda can or hair clippings at the salon, from which egg or sperm cells could in theory be cultivated and used to conceive babies.

“A woman might want to have George Clooney’s baby,” Green said. “And his hairdresser could start selling his hair follicles online. So we suddenly could see many, many progeny of George Clooney without his consent.”

Hank Greeley, a Stanford bioethicist, said that making human eggs and sperm from stem cells “opens up an enormous number of possibilities for changing how humans reproduce.”

Brehany said Catholic teaching holds that the “greatest goods” of human persons, like marriage, marital love, and procreation, must be “treated with the greatest respect.”

“How we respect such goods is a matter of significant principle,” he said. “Once we violate or misuse them, then it is harder to treat them as they deserve, and the negative impacts on the innocent human beings are immense.”

Brehany cited the 1987 Congregation for the Doctrine of the Faith document Donum vitae, which criticizes the separation of the desire to procreate from the conjugal act between married spouses. He suggested that such a violation results in decreased respect for “the dignity of the human persons brought into being this way” and for their suffering “as they struggle to know their own identity and dignity.”

The 2008 CDF document Dignitas personae also addresses bioethical questions related to human life and procreation. It said: “The origin of human life has its authentic context in marriage and in the family, where it is generated through an act which expresses the reciprocal love between a man and a woman… human procreation is a personal act of a husband and wife, which is not capable of substitution.”

While recognizing the legitimacy of the desire for a child, and voicing understanding for the suffering of infertile couples, the document adds “such a desire, however, should not override the dignity of every human life to the point of absolute supremacy.”