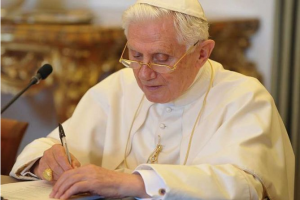 Benedict XVI: Legalization of same-sex marriage is ‘a distortion of conscience’

CNA—Pope Emeritus Benedict XVI has said that the legalization of same-sex marriage in many countries is “a distortion of conscience” which has also entered some Catholic circles.

In an introduction to a new anthology of his writings on Europe, Benedict XVI said that “with the legalization of ‘same-sex marriage’ in 16 European countries, the issue of marriage and family has taken on a new dimension that cannot be ignored.”

“We are witnessing a distortion of conscience which has evidently penetrated deeply into sectors of the Catholic people,” the pope emeritus wrote. “This cannot be answered with some small moralism or even with some exegetical reference. The problem goes deeper and therefore must be addressed in fundamental terms.”

The introduction, published in the Italian newspaper Il Foglio on Sept. 16, was written for the Italian book “The Real Europe: Identity and Mission.”

Pope Francis wrote the preface to the book, which compiles texts from Benedict XVI written both before and during his pontificate, which lasted from 2005 to 2013.

In the preface, Francis wrote that “beyond so many words and high-sounding proclamations, today in Europe the very idea of respect for every human life is increasingly lost, starting with the loss of awareness of its sacredness, that is, precisely starting from the obfuscation of the consciousness that we are creatures of God.”

“Benedict XVI is not afraid to denounce, over the years, with great courage and foresight the many manifestations of this dramatic renunciation of the idea of creation, up to the current, final consequences, described in an absolutely clear and convincing way in the introductory text,” Pope Francis said.

In his introduction, Benedict XVI said it was important to observe that the concept of “same-sex marriage” is “in contradiction with all the cultures of humanity that have followed one another up to now, and thus signifies a cultural revolution that is opposed to the whole tradition of humanity until today.”

He pointed out that there is no doubt that different cultures have varying juridical and moral conceptions of marriage and the family, such as the profound differences between polygamy and monogamy.

“The basic certainty that mankind exists as male and female; that the transmission of life is a task assigned to mankind; that it is the community of male and female that serves this task; and that in this, beyond all differences, marriage essentially consists — it is an original certainty that has been obvious to humanity up to now,” Benedict said.

The pope emeritus wrote that the fundamental upheaval of this idea was introduced with the invention of the contraceptive pill and the possibility it gave of separating fertility from sexuality.

“This separation means, in fact, that in this way all of the forms of sexuality are equivalent,” he said. “A fundamental criterion no longer exists.”

From the separation of sexuality from fertility, he continued, comes the inverse: “Fertility, naturally, can be thought of even without sexuality.”

Benedict XVI noted that it therefore seems right to no longer trust the procreation of humans to the “occasional passion of the flesh, but rather to plan and produce the human rationally.”

Thus a human being is no longer “generated and conceived but made,” the retired pontiff underlined, which signifies that a human person is not a gift to be received but “a product planned by our doing.”