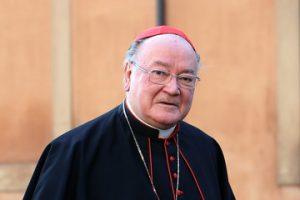 Vatican Aide: Put Man at the Center of the Economy—Cardinal Martino Says World Is More Than Just Money

SANTIAGO, Chile (Zenit.org)—The financial crisis under way in the United States should remind us that the human person must be at the center of the economy, says the president of the Pontifical Council for Justice and Peace. Cardinal Renato Martino affirmed this in a press conference during a visit he is making to Chile through Wednesday.

“The economic crisis, which is manifested throughout the world, perhaps is a sign that the world is not made up only of bills, money and the economy. […] [The crisis] serves as a reminder that the human person must be put at the center of the whole of world economy,” he said, as reported by the Chilean episcopal conference.

Cardinal Martino went on to note some of the problems he considers among the greatest facing humanity today, including the situation of human mobility, and the 200 million people who are seeking work, shelter or a better economic situation. The prelate also addressed the problem of access to water, an issue expected to grow increasingly complicated in the coming years.

“The right to water is a fundamental human right that is part of the right to life, which is made up of several rights, such as the right to food, work and water. That is why water cannot be an element that is privatized; it must be available to all,” he stressed. Integral perspective.

After the press conference, Cardinal Martino met with Chilean bishops to reflect on the relationship between evangelization and social doctrine, “which is not something peripheral or accidental in the evangelizing mission of the Church.”

“Social pastoral care is a right and duty of the Church that is based on theological premises,” he noted. “It is because of this that the integral vision of the human person must never be lacking in the praxis of Christians in society, in any of its realms: the realm of work, economy, politics, culture, of efforts to build peace.”

Social structures, the Vatican official affirmed, “must always consider the truth about man that the Church — with all her doctrine — proclaims, teaches and defends.”

Cardinal Martino clarified the key role of pastors in spreading the social doctrine of the Church.

“If leadership in directly transforming social, economic and political realities according to God’s plan corresponds to the laity,” he explained, “to we pastors and priests corresponds a very delicate and not less exacting commitment, namely, to satisfy laypeople’s right to be formed and enlightened by the social doctrine of the Church, to be supported in forging a solid spirituality and to be encouraged by the closeness of their pastors.”

“Only in this way will they be able to fulfill with evangelical effectiveness their daily commitments in the world,” Cardinal Martino affirmed. “This support is still insufficient in many places.”