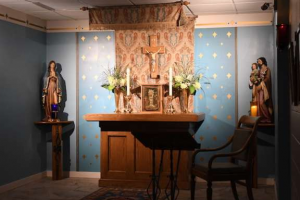 CNA—When two Michigan high school students were planning for a community service project, they decided they wanted to help younger children learn to pray. So, they fund-raised, designed, and managed the construction of a chapel and Marian shrine for the local Catholic middle school.

Adam Sprague is a junior and Jacob Thome is a freshman at St. Philip Catholic Central High School in Battle Creek, Michigan. As part of earning their Eagle Scout badges, Sprague oversaw construction of a Blessed Sacrament chapel and Thome worked to build a Marian grotto.

“Just to have the Blessed Sacrament in the school is a good way to have that presence of Jesus with them all the time and to help them grow closer to our Lord and holiness,” he said. “It’s just one way to increase our Catholic identity and stress the importance of our faith.”

Both Sprague and Thome initiated their projects last year and completed them in December. As part of the Eagle Scout initiative, the students had to manage volunteers and work with interior or landscape designers on the projects’ layouts.

Sprague fundraised over $4,000 for the project by promoting it after weekend Masses. The money was used to purchase altars and pews. A local construction company donated free labor and tile, and a parishioner, who is an interior designer, also consulted on the chapel’s layout.

“I’m just glad how everything came together especially so that we can have kids start praying more and getting closer to God. I think it’s really special that there is adoration in there every Friday to increase that faith formation,” Sprague told CNA.

The chapel is named after St. Jose del Rio, a 14 year-old martyr who was executed for his faith during the Cristero War in Mexico. Sprague said the name was voted on by the middle school students, noting that the saint best represented the community.

“We have a very diverse community,” he said.  “We wanted to go with the saint that they could connect with. We wanted them to be represented in terms of the name.”

Father Fred Adamson, Sprague’s uncle and the vicar general for the Diocese of Phoenix, procured a first class relic of the saint for the chapel. Sprague said the relic’s presence in the chapel will benefit the students’ faith journey.

“Sometimes if the kids don’t necessarily have a good connection with God, a good foundation, it’s hard” for them to establish a strong Catholic faith, he said. “Just having a physical piece of the saint, I think will help a lot of the kids along with their faith journey,” he later added.

With adoration each Friday, the chapel is already being used by students and teachers. A special adoration service will be held Feb. 7 to pray for a girl at the Catholic elementary school who will be having a kidney replacement.

Fundraising for the project

Thome began fundraising for the Marian Grotto in September by announcing his project after several Masses. He told CNA that he received nearly $5,000, which he used to purchase the Marian statue, trellis, and landscaping materials, including plants and benches.

“I think prayer is important. It can bring you closer to God and Jesus. Especially in middle school, it’s important to start your prayer life early, to become closer to God, which will benefit you later in life,” he said.

Father Ankley emphasized the importance of prayer. He said areas reserved for prayer are vital for students, noting that young people need an opportunity to be removed from the distracting noises of the world.

“We all need that time and place for just a little bit of quiet to hear our Lord because he is always reaching out to us, always wants to be with us.…he is always pursuing us.”

The priest expressed gratitude for the students, highlighting the strong faith of these young men who have taken up a role in the Church now instead of waiting for the future.

“Sometimes we talk about how students are the future of the Church, but they are the Church right now. They have their place in their Church,” he said.