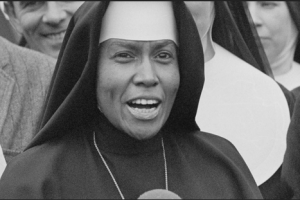 “I’m here because I’m a Negro, a nun, a Catholic, and because I want to bear witness,” Sister Mary Antona Ebo said to fellow demonstrators at a March 10, 1965 protest attended by King.

After the “Bloody Sunday” attacks, King had called on church leaders from around the country to go to Selma. Archbishop Joseph E. Ritter of St. Louis had asked his archdiocese’s human rights commission to send representatives, Ebo recounted to the St. Louis Post-Dispatch in 2015.

Ebo’s supervisor, also a religious sister, asked her whether she would join a 50-member delegation of laymen, Protestant ministers, rabbis, priests and five white nuns.

Just before she left for Alabama, she heard that a white minister who had traveled to Selma, James Reeb, had been severely attacked after he left a restaurant.

At the time, Ebo said, she wondered: “If they would beat a white minister to death on the streets of Selma, what are they going to do when I show up?”

In Selma on March 10, she went to Brown Chapel African Methodist Episcopal Church, joining local leaders and the demonstrators who had been injured in the clash.

“They had bandages on their heads, teeth were knocked out, crutches, casts on their arms. You could tell that they were freshly injured,” she told the Post-Dispatch. “They had already been through the battle ground, and they were still wanting to go back and go back and finish the job.”

Many of the injured had been treated at Good Samaritan Hospital, run by Edmundite priests and the Sisters of St. Joseph, the only Selma hospital that served blacks. Since their arrival in 1937, the Edmundites had faced intimidation and threats from local officials, other whites, and even the Ku Klux Klan, CNN reported.

The injured demonstrators and their supporters left the Selma church, with Ebo in front. They marched towards the courthouse, then blocked by state troopers in riot gear. She and other demonstrators then knelt to pray the Our Father before they agreed to turn around.

Despite the violent interruption, the 57-mile march would draw 25,000 participants. It concluded on the steps of the state capitol in Montgomery, with King’s famous March 25 speech against racial prejudice.

“How long? Not long, because the arc of the moral universe is long, but it bends toward justice,” King said.

King would be dead within three years. On a fateful April 4, 1968, he was shot by an assassin at his Memphis hotel.

He had asked to be taken to a Catholic hospital should anything happen to him, and he was taken to St. Joseph Hospital in Memphis. At the time, it was a nursing school combined with a 400-bed hospital.

There, too, Catholic religious sisters played a role.

The Franciscan nuns had been walking around the hospital grounds when they heard the sirens of an ambulance. One of the sisters was paged three times, and they discovered that King had been shot and taken to their hospital.

The National Guard and local police locked down the hospital for security reasons as doctors tried to save King.

“We were obviously not allowed to go in when they were working with him because they were feverishly working with him,” Sister Jane Marie said. “But after they pronounced him dead we did go back into the E.R. There was a gentleman as big as the door guarding the door and he looked at us and said ‘you want in?’ We said yes, we’d like to go pray with him. So he let the three of us in, closed the door behind us and gave us our time.”

Hofmeyer recounted the scene in the hospital room. “He had no chance,” she said.

Klein said authorities delayed the announcement of King’s death to prepare for riots they knew would result.

Three decades later, Klein met with King’s widow, Coretta Scott King, at a meeting of the Catholic Health Association Board in Atlanta where King was a keynote speaker. The Franciscan sister and the widow of the civil rights leader told each other how they had spent that night.

Klein said being present that night in 1968 was “indescribable.”

“You do what you got to do,” she said. What’s the right thing to do? Hindsight? It was a privilege to be able to take care of him that night and to pray with him. Who would have ever thought that we would be that privileged?”

She said King’s life shows “to some extent one person can make a difference.” She wondered “how anybody could listen to Dr. King and not be moved to work toward breaking down these barriers.”

Klein would serve as chairperson of the Franciscan Alliance Board of Trustees, overseeing support for health care. Hofmeyer would work in the alliance’s archives. Last year both were living at the Provinciate at St. Francis Convent in Mishawaka, Indiana.

For her part, after Selma, Ebo would go on to serve as a hospital administrator and a chaplain.

In 1968 she helped found the National Black Sisters’ Conference. The woman who had been rejected from several Catholic nursing schools because of her race would serve in her congregation’s leadership as it reunited with another Franciscan order, and she served as a director of social concerns for the Missouri Catholic Conference.

She frequently spoke on civil rights topics. When controversy over a Ferguson, Mo. police officer’s killing of Michael Brown, a black man, she led a prayer vigil. She thought the Ferguson protests were comparable to those of Selma.

“I mean, after all, if Mike Brown really did swipe the box of cigars, it’s not the policeman’s place to shoot him dead,” she said.

Archbishop Robert J. Carlson of St. Louis presided at her requiem Mass in November, saying in a statement “We will miss her living example of working for justice in the context of our Catholic faith.”