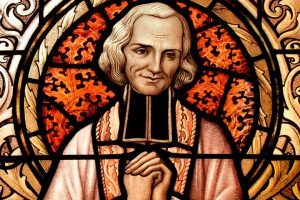 As you know, today, Friday June 19, 2009, is the 150th Anniversary of the death of St. John Vianney, known by many as the beloved Cure d’Ars and the patron saint of parish priests.  Today is also the Feast of the Sacred Heart of Jesus.  In light of these converging monumental and historical truths, Pope Benedict XVI carefully chose today to declare the beginning of the Year of the Priest.  The Year of the Priest will conclude on June 19, 2010, marked by an international gathering of priests in Rome with the Holy Father.

Deacon Keith Michael Esshaki, a deacon of the Chaldean Rite Catholic Church, shares with Catholic Business Journal readers these two powerful reflections by Sts. John Vianney and Therese of Lisieux in honor this gift of the Year of the Priest.

From St. John Vianney, a simple reality-check on the gift of the Mass:

And from St. Therese of Lisieux, a powerful prayer for priests:

O, Jesus, eternal Priest,
keep your priests within the shelter
of Your Sacred Heart,
where none may touch them.

Keep unsullied their lips,
daily purpled with Your Precious Blood.

Keep pure and unearthly their hearts,
sealed with the sublime mark of the priesthood.

Let Your holy love surround them and
shield them from the world’s contagion.

Bless their labors with abundant fruit and
may the souls to whom they minister
be their joy and consolation,
here and in heaven their beautiful
and everlasting crown. Amen.

Deacon Keith Esshaki is a Chaldean Rite Catholic and founder and CEO of GTC Systems, Inc. in San Diego, CA.