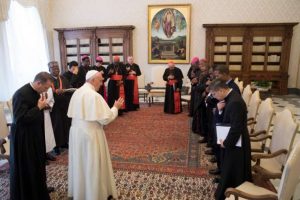 Nigerian bishops: Prayer, especially the rosary, will ‘save our country’

ACI Prensa—Benin City, Nigeria—In a strong critique of Nigeria’s governing administration, the country’s Catholic bishops have said that Nigeria must find a new approach to self-governance as it prepares for its 2019 general election. The bishops added that prayer for Nigeria is essential to the country’s future.

“As we look forward to the elections of 2019, we refuse to give up on our hope for a great, prosperous and peaceful nation. For our dreams to be achieved, we must embrace a new way of governing ourselves. There is need for genuine repentance and sincere moral transformation,” the Nigerian bishops’ conference said in a statement released at the conclusion of their September plenary meeting.

The Nigerian bishops have spoken frequently to criticize Nigerian president Muhammadu Buhari, whom they have admonished for failing to respect the religious freedom of Christians, and for being slow to address attacks on farmers by nomadic Fulani herdsmen. They raised that issue again in their September communique.

“We observe with deep sadness how unarmed Nigerians are brutally slaughtered, owing to religious and political differences, boundary disputes, and other such reasons. We equally observe that Government is often slow in responding to these violent occurrences and often allows many of the perpetrators of these heinous crimes to go unpunished, thus creating a culture of impunity. We totally condemn these killings and call on Government to defend the life and property of every Nigerian citizen.”

“We have in our past communiqués and other statements condemned the spate of violence and high level of insecurity in our land. Yet, to our greatest dismay, these have continued unabated,” the bishops said.

“We encourage all registered voters to ensure that they are equipped with their voter’s card, reject and denounce the illegal practices of selling and buying of votes,” the bishops said.

“Despite the deception and defections, Nigerian voters must be wise enough to show some of our politicians, who may have so much to hide, that ‘they can run, but they cannot hide.’”

The bishops’ call for free elections stems from controversy surrounding the 2015 election, in which Buhari was elected. That election stoked protests in the country, as the election commission struggled to distribute voter identification cards, and after the election was postponed amid outbreaks of Boko Haram violence in the country’s northern regions. Although the election was eventually held, many suspected the postponement was politically motivated, and reports of voter intimidation in the country were rampant. The process was roundly condemned by politicians and journalists.

“It is the right of Nigerians to fully participate in the electoral process without intimidation and violence. The responsibility for this lies on all of us. We demand that the choice of the electorate, once made, be respected by all,” the bishops said.

The bishops also called for a great respect for the rule of law in Nigeria, and for an expanded sense of religious liberty. “At the same time, we enjoin everyone to avoid acts of religious fanaticism in order to promote peaceful co-existence and harmony. Religion is a matter of conviction, not coercion,” they added.

Their communique also called for the release Leah Sharibu, a Christian kidnapped in February by the Boko Haram terrorist group, along with more than 100 other children. While the other children have been returned to their families, Sharibu has not, reportedly because she has refused to convert to Islam. The bishops have repeatedly called for government intervention, and criticized what they say is a slow response from Nigerian authorities.

“We demand that the Federal Government secure the unconditional release of Leah Sharibu. She is still being held captive because she refused to denounce her Christian faith,” the statement said.

Addressing the sexual abuse crisis in the Church, the bishops said that they “reaffirm our commitment to priestly celibacy and chastity as well as our unity with the universal Church under the Holy Father. As Church, we must see in all these scandals a wakeup call to stand up for the truth and grow stronger in witnessing to the Kingdom of God.”

Concluding, the bishops said that they “wish to show that it is still possible for all Nigerians to join hands across religious, ethnic and political divides in order to build one, united and robust Nation that all of us would be proud of.”

“Our Lord Jesus Christ demonstrated the power of prayer during his earthly life.  He prayed incessantly, especially, at very decisive and significant moment of his life. Following in his footsteps, we direct that our Church at various levels, parishes and families, intensify the daily recitation of the Holy Rosary and practice other forms of devotion to save our country,” they said.

“We urge all Nigerians to continue to pray for our nation. It is our firm belief that our collective prayers will never go unanswered.  We therefore say to all Nigerians: Do not be afraid, do not be discouraged.”