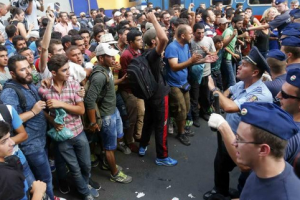 The unrestrained migration of hundreds of thousands of mostly Muslim immigrants into European countries the last few years—most notably in Germany, where German Chancellor Angela Merkel allowed more than a million Syrian refugees to pour into the country’s cities and towns, but also in other European countries—seems to have come to an abrupt about-face.

This could be an historical moment that echoes back to centuries ago, when the Ottoman Empire threatened to overrun Christian Europe.

Today, Austria, Italy and other countries, even Germany, are beginning to make it clear that Muslim immigrants should pack their bags and get out if they won’t abide by their new country’s laws and value-principles.

The most pro-active and clear of these countries is Austria.

As leader of the largest party after the 2017 election, newly elected Chancellor of Austria Sebastian Kurtz (chairman of the Austrian People’s Party) was charged with the formation of a new government by President Van der Bellen. Kurtz subsequently formed a coalition with the Freedom Party and was sworn in as chancellor on 18 December 2017 alongside his new government.