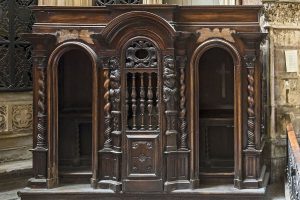 Confessions of a Basilica Confessor

ROME, OCT. 2, 2009 (Zenit.org).- They have a fixed schedule, a day of rest, and a couple of hours for lunch. Their office is not a desk with a computer, but a confessional. They are the basilica confessors, those priests assigned a special ministry to impart the sacrament of reconciliation on a full time basis at the four major basilicas of Rome. A red light indicates they are ready to administer the sacrament to anyone who approaches.

There are signs stating the hours of availability, and in what language penitents can confess, including English, French, Spanish, Italian, Portuguese, Polish and German — the most common. The ministry of reconciliation in the four major basilicas is entrusted to four different religious orders. For example, Pope Clement XIV assigned St. Peter’s Basilica to the Conventual Franciscans in 1774. The Apostolic College of   Confessors for St. John Lateran are members of the Order of Friars Minor (Franciscans), Dominicans are in St. Mary Major and Benedictines hear confessions in St. Paul Outside the Walls.

The colleges of confessors of each basilica are assigned by their congregation, but must be approved by the Apostolic Penitentiary. ZENIT talked to Dominican Father Pedro Fernández, confessor in St. Mary Major. For him, being a confessor means “exercising the priesthood that the Church has entrusted to me in the name of Christ. It allows me to be in direct contact with persons and souls.” He said that his mission often goes beyond absolving. “I see much loneliness.

There are penitents who come wanting to be relieved, to be listened to. The confessor must take advantage of this occasion to help them, in the first place, to be conscious of their sins to be able to repent, because no one repents of something of which one is unaware.”

Talking to a penitent can also be an opportunity to evangelize: “There is much religious ignorance. It is appropriate that at that moment the confessor give an appropriate catechesis.” Father Fernández acknowledged that to administer this sacrament as it should be administered, the Church needs many hands. “If there were more confessors, there would be more confessions. It’s always difficult to ask a priest to hear one’s confession, but if one sees him seated, it’s easier.”

The priest emphasized the importance that the faithful see this sacrament as a gift and not as a punishment: “We must approach confession to receive this forgiveness. Herein lies the beauty of confession. It is the sacrament of peace with oneself.” And, as in any job, there are days that are busier than others, in which more faithful come and the lines grow long: “In Advent, Lent, the first Fridays of the month there are many more. It is a wonderful experience to see a person repent.”

But, why should I tell my sins to a priest? Why can I not confess to God directly? These are questions that thousands of Catholics ask themselves. Father Fernandez explained: “No one has seen God. The relationship with him is mediated. In our faith, this mediation is through the sacraments, faith and mystical experience.

“In order to confess, one must have faith, believe in God, know one’s sins and repent. It is not a way imposed by the Church. It is a way indicated to us by faith.” Father Fernández pointed out the real meaning of confession: “It isn’t a psychological consultancy, giving one a human reason for one’s problems. Above all, it is forgiveness.”

He also noted that it is a sacrament that Benedict XVI has greatly emphasized in this Year of the Priest. “The fact that the Pope recommends to priests that we sit to hear confessions, means that we must be conscious of our identity and sanctification,” the confessor said. Father Fernández added that one can’t give what he does not have. “One learns to confess by confessing,” he said. “It would be hard to be a confessor if one doesn’t confess oneself well.”