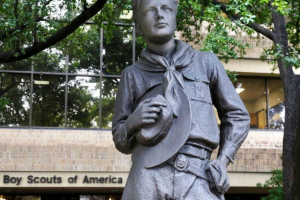 Achieving the elite rank of Eagle Scout is displayed proudly on the resumés of many prominent, ethical business achievers, nonprofit leaders and even some pro-athletes, astronauts, and many Catholic leaders today.  Great achievements, it has been said, began with scouting. While it remains to be seen how that will work out with girls now being accepted into Boy Scout ranks, there are other matters to be concerned with first; namely, resolving as much as possible the molestation cases that have been and continue to be brought against the once-unquestioningly venerable, character-forming institution.

Most of the new cases date to the 1960s, ’70s and ’80s, before the Boy Scouts adopted mandatory criminal background checks, abuse-prevention training for all staff and volunteers, and a rule that two or more adult leaders must be present during all activities. Many of the lawsuits accuse the group of negligence and cover-ups.

Where will things go from here with the Boy Scouts of America?

AP reports that—The Boy Scouts of America urged victims to come forward Tuesday as the historic, 110-year-old organization filed for bankruptcy protection in the first step toward creating a huge compensation fund for potentially thousands of men who were sexually molested as youngsters decades ago by scoutmasters or other leaders.

The Scouts resorted to Chapter 11 in hopes of surviving a barrage of lawsuits, many of them made possible by recent changes in state laws that allow people to sue over long-ago sexual abuse.

Bankruptcy will enable the organization to put those cases on hold for now and continue operating. But ultimately the Boy Scouts could be forced to sell off some of their vast property holdings, including campgrounds and hiking trails, to raise money for a victims’ fund that could top $1 billion.