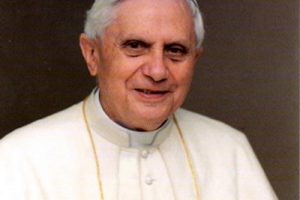 Economy needs to recover ethics and the ‘logic of giving,’ Pope explains

Vatican City (CNA)—This morning in Rome, the Pope interrupted his series of teachings on the saints to explain the essential thoughts contained in his new social encyclical, published yesterday. In the face of the world’s “vast and profound” problems, Benedict XVI stated that the world economy must recover ethical principles.

The encyclical, explained the Holy Father, highlights the fact that “charity in truth is the principal driving force behind the authentic development of every person and of all humanity. … Only with charity, illuminated by reason and by faith, is it possible to pursue development goals that possess a more humane and humanizing value.”

The document, he went on, “intensifies Church analysis and reflection on social themes of vital interest to humankind in our century. In a special way it harks back to what Paul VI wrote more than forty years ago in his ‘Populorum progressio.'”

In a manner similar to all papal teachings, Pope Benedict noted that “‘Caritas in veritate.’ does not seek to offer technical solutions to the enormous social problems of the modern world. …What it does do is recall the fundamental principles that are indispensable for building human development over coming years.”

At the core of the Pope’s message is “concern for the life of man, seen as the center of all true progress; respect for the right to religious freedom; … and the rejection of a Promethean vision of human beings which sees them as the sole architects of their own destiny.” “Upright men and women are needed, both in politics and in the economy, people sincerely concerned for the common good,” he said.

Referring then specifically to “world emergencies,” the Pope spoke of the urgent need to call “public opinion to the drama of hunger and of food security,” which “must be faced decisively, eliminating the structural causes which produce it and promoting agricultural development in the poorest countries.”

Any overhaul of the world’s economy requires ethics in order to “function correctly,” the Holy Father stressed. “It needs to recover the important contribution of the principle of gratuitousness and the ‘logic of giving’ in the economy and in the market, where profit cannot be the only rule. “But this is possible only through commitment on the part of everyone, economists and politicians, producers and consumers, and it presupposes a formation of consciences capable of strengthening moral criteria in the elaboration of political and economic projects.”

Another necessity, the Holy Father proceeded, “is for all humankind to practice a different lifestyle, one in which each individual’s duties towards the environment are linked to his or her duties towards human beings, considered both in themselves and in relation to others.” Finally, Pope Benedict turned to the world’s “vast and profound problems,” and underscored the “need for a world political authority regulated by law, one that observes the principles of subsidiarity and solidarity and is firmly directed towards attaining the common good, while respecting the great moral and religious traditions of humanity.”

The Pope finished his address by asking the faithful to pray that “this Encyclical may help humankind to feel itself to be a single family, committed to creating a world of justice and peace.” He also called upon them to pray for “the heads of State and government of the G8 who are currently meeting in L’Aquila, Italy. May this important world summit generate decisions and directives that serve the true progress of all peoples, especially the poorest.”