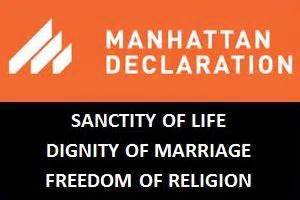 On November 20, 2009, a group of prominent and widely diverse Christian clergy, leaders and scholars  released the Manhattan Declaration, a three-paragraph clarion call for Christians of all denominations to adhere to and defend, under any circumstance, their core principles—which are anchored both in divine and natural laws—regarding the sanctity of human life, traditional marriage and religious liberty for all.

Drafted by Dr. Robert George (a professor of Jurisprudence at Princeton University), Dr. Timothy George (a professor of the Beeson Divinity School at Samford University) and Chuck Coulson (the founder of the Chuck Colson Center for Christian Worldview), the Declaration was immediately signed by more than 150 Orthodox, Catholic and evangelical Christian leaders, and made public in a Noon press conference at the National Press Club in Washington,D.C.

To date, nearly 300,000 men and women, leaders, business owners, bisohps, pastors and quiet citizens nationwide have added their names to the list of signers, including Archbishop Charles J. Chaput, Archbishop of Denver.  In an interview with the Catholic News Agency, Archbishop Chaput outlines his reasons for signing, and encouraging others to sign, the Manhattan Declaration.—ed.

Here is the article, used with permission:

Denver, Colo., Dec 7, 2009 / 03:11 am (CNA)—In an exclusive interview with Catholic News Agency, Archbishop of Denver Charles J. Chaput has explained his reasons for signing the Manhattan Declaration. He said the Declaration should “galvanize” Christians and others in defense of pro-life issues, the nature of marriage and religious freedom.

“I was glad to be invited to sign the declaration, and glad to sign because I believe in its content,” Archbishop Chaput told CNA.  He described it as a “straightforward” statement defending the sanctity of life, religious liberty and the definition of marriage as a union of husband and wife.

The archbishop thought one of the goals of the declaration is to “galvanize good people,” beginning with Christians but including others, in order to organize to work to change the direction of the country and to “resist” when necessary.

Archbishop Chaput commented that the signatories of the Declaration did not create the political environment that “forced it to be written.”

“The signers didn’t create the declaration’s urgency or its timing. Others did that for them,” he told CNA.

He said the effort was provoked by those who want to “force” religion out of the public square, to “redefine” marriage and human sexuality, or to “sacrifice” women and unborn children on the “altar of a fraudulent ‘right’” to abortion.

Asked about the claim that the Manhattan Declaration neglects social justice issues, Archbishop Chaput pointed to the “outstanding” track record of the Catholic Church and other religious communities in serving the poor, the immigrant, the homeless and the infirm.

In his view, the claim that the Declaration neglects such issues is “without merit” and “designed to distract.”

To the argument that the Declaration violates the separation of church and state because it features Christians telling the government what to do, the archbishop replied:

“In the United States, citizens ‘tell government what to do’ all the time. It’s called democracy.”

Nothing in the U.S. Constitution bars religious communities, religious leaders or individual believers from taking a “vigorous role” in public debate, he added.

“In fact, the American system depends on exactly the opposite: In order to survive, our democracy requires citizens to advance their beliefs energetically and without apologies in the public square.”

The archbishop explained that he was not involved in the development of the Manhattan Declaration, but said he knows and respects many of the other signatories. He reported that the main Catholic input for the Declaration was provided by Princeton University’s Professor Robert P. George.

The Declaration’s signers want people to realize “how difficult” the present moment in U.S. history is, he added.

“Our rights and liberties are never really guaranteed by words on a piece of paper. We guarantee them ourselves, under the sovereignty of God, by struggling for what we believe.”

Real hope has “a cost in sweat and hard work,” Archbishop Chaput said to CNA.

“Now and always, we need to trust in God; and then we also need to act. Right here, right now, in this country, the work of organizing and struggling in the public square for what we believe belongs to us.  That means all of us, and each of us.”

As of Friday afternoon, the Manhattan Declaration’s website claimed over 252,000 signatories since its Nov. 20 release. Its website is at http://manhattandeclaration.org