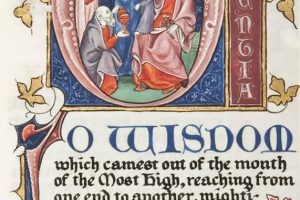 “Gazing afar off, behold I see the power of God coming, and a cloud covering all the land. Go out to meet him and say: tell me if you are the one who is to reign over the people Israel.” So sounds the cry of the world before Christ, a cry placed on the lips of many religious during the Responsorium for the Office of Matins on the first Sunday of Advent.

The season of Advent places us between the two comings of our Savior, and as such calls us to ponder each of them as imminent; one in the yearly celebration of Christmas and the other in a time known to God alone.

As concerns the celebration of Christmas, Holy Mother the Church prepares us each year by setting before us the teachings, figures and prophecies of the Old Testament. She moves her children to assume the sentiments of a world awaiting its Savior; one of law and prophecy for the Jews, of philosophy and poetic mythology for the gentile nations.

And yet these sentiments are also necessarily assumed in the light of Christ already come. We consider the law and prophets as fulfilled, and the search of the magi and the shepherds (who, in the thought of Chesterton, represent philosophy and saner pagan mythology) as ended in the finding of the wondrous Babe of Bethlehem.

Let us then also gaze afar off, and run to acclaim him whom we know to be the one who came to reign not only over his people Israel, but over all men.

The Church, in her venerable tradition, has provided us with such acclamations in a series of antiphons referred to as the “O Antiphons.” These are framed in the words of holy writ, gathered together in the light of Christ, the bridegroom of the Church, and so named because each of them begins with an “O,” followed by an Old Testament title given to Our Lord.

The O Antiphons are sung both before and after the Magnificat during the Office of Vespers from December 17 through 23. They pave the way to the singing of the Martyrology on Christmas Eve, which is the liturgical proclamation of the earthly birth of the Incarnate Word. These also make up the verses (albeit in various, often abbreviated forms) of the well-known Advent hymn “O Come, O Come Emmanuel!”

These wondrous O Antiphons provide us with excellent material for meditation, as they progressively move from the graces of Creation through the successive revelations of God concerning the Messiah to come. Each title used for Christ focuses upon one particular aspect of Our Savior and then is followed by further titles or qualities flowing from that title. Finally, each antiphon ends with a petition beseeching some particular favor of Our Lord which is appropriate to the title by which He was just invoked.

The O Antiphons are as follows:

O Sapientia, quae ex ore Altissimi prodisti, attingens a fine usque ad finem, fortiter suaviterque disponens omnia: veni ad docendum nos viam prudentiae.  (O Wisdom, which came forth from the mouth of the Most High, touching from end even unto end, strongly and sweetly disposing all things: come to teach us the way of prudence).

O Adonai et Dux domus Israel, qui Moysi in igne flammae rubi apparuisti, et ei in Sina legem dedisti: veni ad redimendum nos in bracchio extento. (O Adonai and leader of the house of Israel, Who appeared to Moses in the red flaming fire, and gave to him the law on Sania: come to redeem us with your extended arm.)

O radix Jesse, qui stas in signum populorum , suer quem continebunt reges os suum, quem entes deprecabuntur: veni ad liberandum nos, iam noli tardare. (O Root of Jesse, you who stand as an ensign of the peoples, before whom kings sht their mouths, whom the gentiles beseech: come to free us, do not delay.)

O Clavis David, et sceptrum domus Israel; qui apeeris, et nemo claudit; claudis, et nemo aperit: veni et educ vinctum de domo carceris, sedentem in tenebris et umbra mortis. (O Key of David, and scepter of the house of Israel; you who oipen, and no one closes; who closes, and no one opens: come and lead the bount out from prison, those sitting in darkness and the shadow of death.)

O Rex gentium et desideratus earum, lapisque angularis, qui facis utraque unum: veni et salva hominem, quem de limo formasti. (O King of the gentiles and their desired one, and the cornerstone who makes two one: come and save man, whom you formed from the slime of the earth.)

The first antiphon begins with the eternal procession of Begotten Wisdom, the Word spoken by the Father and through whom all things were made. It is followed by a description of the breadth, power and harmonious disposing of that creation. Then prudence is sought from wisdom, and this is fitting. For prudence is the virtue whereby we choose the proper means toward a known end. Wisdom himself, who is our end, becomes incarnate so as to reveal himself more abundantly to us and to win for us the grace needed to be united to him.

Then follows a movement toward God as he revealed himself to Moses and as he also took the Israelites the Israelites to himself as his chosen people. We see here the supernatural revelation of God in the burning bush and the giving of the law to the house of Israel. God does this with extended arm, for it is beyond nature and requires a special condescension of God. Redemption is now sought for fallen man.

The next two antiphons invoke images from the prophecies of Isaiah, showing that the Savior to come will be of a particular tribe and family. He will conquer kingdoms, a feat held in awe by kings and nations. He will have the authority of the high priest and lead out those imprisoned by the Law, granting the grace needed to fulfill it. A note of urgency now enters into the petitions.

The fifth antiphon shows that the Messiah will come for all men, for “the light shineth on the evil and the good alike,” and “I am the light of the world. Whoever believes in me shall not walk in darknes but shall have the light of life.”

The sixth antiphon explicitly invokes Our Lord as king also of the gentiles, desired by them as evidenced in the cry of the sybils and eclogues of Virgil. Jesus will be the cornerstone uniting Jew and gentile alike, the new Adam reforming the sons of the first Adam formed from the slime of the earth.

In the last antiphon, all the titles are summed up. He shall be called Emmanuel, “God with us,” for he will remain with us forever, “even unto toe consummation of the world.”

Finally, to crown them all, if one takes the first letter of each title, moving backwards from Emmanuel, the letters so taken spell out ERO CRAS, literally “I will be tomorrow,” that is, “I will come tomorrow.”  May we be waiting with lamps in hand!

One More…
But there remains yet another antiphon sung by the Norbertine Order on the night of December 23, the previous antiphons having commenced one day early. It is as follows:

O Virgo Virginum, quomodo fiet istud? Quia nec primam similem visa es nec habere sequentem. Filiae Jerusalem, quid me admiramini? Divinum est mysterium hoc quod cernitis. (O Virgin of Virgins, how can this thing be done? Because neither has there before been seen one like to yourself, nor shall there be one after  you. Daughters of Jerusalem, why do you wonder at me? Divine is the mystery which you perceive.)

This extra antiphon honors Our Lady; the first fruit of the redemption which Christ brought to the world and the mother through whom he brought it. One can look back and see her intimately united to each of the titles of Our Lord.

Mary is the air upon which the Word spoken forth resonates unto the whole world, the bush of humanity burning with the presence of God yet not consumed. Mary is also the root of Jesse, whence the flower of Christ springs. She is immaculately conceived, escaping the prison of sin and the Law, and in these days we ponder her as bearing the light of the world.

Mary is the new Eve and mother of all those remade in Christ, and the Virgin Mother who has brought forth and conceived the child Emmanuel.

May she hold us in her arms next to her beloved son during this Advent season.