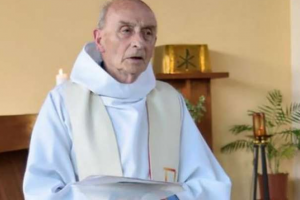 CNA—The Diocese of Rouen, France will mark the fourth anniversary of the murder of Fr. Jacques Hamel with a Mass and procession at the local church on Sunday.

Archbishop Dominique Lebrun of Rouen and Archbishop Eric de Moulins-Beaufort of Reims, president of the French bishops’ conference, will be present, according to local media. French Minister of the Interior Gérald Darmanin is also expected to attend the ceremony.

A silent procession at 10 a.m. will be followed by a Mass at the local church at 10:30, the diocese announced.

“It is good that religious and civil authorities, and citizens, believers of all faiths and non-believers, come together to demonstrate their common refusal of any violence and their deep respect for human life,” the diocese said. It thanked “all those who participate directly or indirectly, through prayer and commitment on this fourth anniversary.”

Fr. Hamel was killed while celebrating Mass July 26, 2016 after two armed gunmen stormed his church in Saint-Etienne-du-Rouvray in Normandy.

The assailants entered the church and took the 85-year-old priest and four others hostage. Local law enforcement reported that the priest’s throat was slit in the attack, and that both of the hostage takers were shot dead by police. The attackers were identified as Islamist extremists.

News of Hamel’s death shocked the world. His funeral Mass was attended by thousands, including government officials and representatives from the Jewish and Muslim communities. At the funeral, Fr. Hamel’s sister Roselyne spoke about his mercy and love, saying that he had refused to become an officer during his military service in colonial Algeria so that he would not have to order others to kill.

A campaign launched by the Italian chapter of the pontifical foundation Aid to the Church in Need pledged to support the studies of 1,000 seminarians around the world, in honor of Hamel.