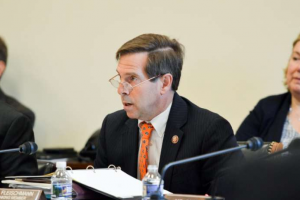 Congressman writes to DOJ after attacks on Catholic churches

A Catholic congressman is asking the U.S. Attorney General to respond to a spate of acts of vandalism against churches around the country.

In a letter to Attorney General William Barr on Wednesday, Rep. Chuck Fleischmann (R-Tenn.) urged the Justice Department “to protect religious freedom and combat religious discrimination in the United States.”

Fleischmann cited “nearly a dozen” acts of vandalism at Catholic churches in the U.S. as the impetus for his letter.

“There is something to be said about how the rise in vandalism happening in places of worship could correspond with a rise of hostility towards religion,” the congressman told CNA in a statement on Wednesday. “We must be vocal in condemning any act of vandalism to any house of worship, for any religion.”

“These are sacred places, which is why I asked the DOJ to continue to protect religious freedom and combat these instances of religious discrimination,” the congressman said.

“Since June, there have been nearly a dozen reported attacks on Catholic churches around the nation. These disturbing attacks range from arson to the beheading of a statue of the Virgin Mary,” said Fleischman in his letter.

“I find these attacks to be a disturbing trend, happening in multiple areas across the nation, including within my own congressional district.”

“In times of uncertainty we naturally turn to religion for comfort and peace,” the congressman wrote, “something many Americans are seeking as we combat COVID-19, but these attacks add another level of distress for many across our nation.

Quoting a speech by Barr at the University of Notre Dame last year, Fleischmann agreed with the attorney general that “We must be vigilant to resist efforts by the forces of secularization to drive religious viewpoints from the public square and to impinge upon the free exercise of our faith.”

There has been a series of attacks on Catholic churches and statues this summer.

Most recently, local police have been investigating two fires at Sacred Heart Church in Weymouth, Massachusetts, that occurred over the weekend, as arson. In July, Queen of Peace church in Ocala, Florida, was set on fire and a man has been charged with arson. In Los Angeles, Mission San Gabriel Arcángel church suffered a fire in the predawn hours of July 11.

Other Catholic statues and memorials have been vandalized, including a monument to unborn children at Our Lady of the Assumption Church in Bloomingburg, New York, a crucifix at St. Bernadette Parish in Rockford, Illinois, a statue of Christ at a Montana ski resort, and a statue of Mary in Gary, Indiana.

It didn’t stop there.

As state and local governments have imposed various restrictions on businesses, assemblies, and churches during the pandemic, officials at the Justice Department have repeatedly stated that churches and religious gatherings cannot be singled out for greater restrictions than those imposed on similar institutions.

Attorney General Barr, in an April 14 statement, said that the constitution allows for a temporary suspension of freedoms during an extraordinary circumstance when the public safety requires it, but that freedom of religion cannot be treated more severely than other freedoms of assembly.

In cases “when the community as a whole faces an impending harm of this magnitude, and where the measures are tailored to meeting the imminent danger, the constitution does allow some temporary restriction on our liberties that would not be tolerated in normal circumstances,” Barr said.

He added that “government may not impose special restrictions on religious activity that do not also apply to similar nonreligious activity. For example, if a government allows movie theaters, restaurants, concert halls, and other comparable places of assembly to remain open and unrestricted, it may not order houses of worship to close, limit their congregation size, or otherwise impede religious gatherings.”

Later in the summer, when New York City allowed mass protests against racism in spite of its restrictions on the size of outdoor gatherings, Justice Department officials wrote Mayor Bill de Blasio reminding him that he could not enforce a double standard for churches and protests.

Fleischmann, in his August 5 letter to Barr, said that religion is a source of “comfort and peace” during troubled times, “but these attacks add another level of distress for many across our nation.”