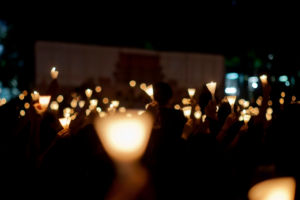 NCRegister—Hong Kong Catholics have played an important role in the massive protests that have overtaken the city nearly every weekend since mid-June. At the height of the protests, crowds swelled to an estimated 2 million people, and violence erupted. Catholics have been at the forefront of the efforts to keep the protests peaceful, while also seeking to make the voice of the Church heard in the streets and in the halls of Chinese power.

Demonstrators first gathered more than four months ago to march against proposed legislation that could lead to the extradition of Hong Kong citizens to mainland China. Such a step by the communist government in Beijing is seen by many as an aggressive move that erodes the freedoms Hong Kong has been afforded since 1997, when the former British colony became a “special administrative region” of the People’s Republic of China.

At the time of the handover, the people of Hong Kong were told that once the British hegemony was ended, they would not suddenly find themselves living under the same laws as the rest of communist China. The agreement for the handover stipulated that Hong Kong was to be a part of communist China but granted a high degree of autonomy, including control over its own legal system and economic life. The unusual status has been described by the phrase “one country, two systems.”

From the start, however, there has been worry that Beijing would not honor the… Read more>>