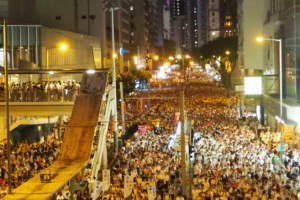 New York Times—June 17, 2019—Church leaders attended another huge Hong Kong protest that called for the withdrawal of a controversial extradition bill and the resignation of the Chinese territory’s leader.

Although chief executive Carrie Lam announced on June 15 that she had suspended the bill, Hong Kong people were not satisfied and turned out in even greater numbers on June 16 than the one million estimated to have marched on June 9.

The Civil Human Rights Front estimated that about two million people joined the latest rally — a record for a protest in Hong Kong — but police claimed only 338,000 attended.

The pressure on Lam increased today when Hong Kong’s most prominent student activist, Joshua Wong, was released from prison and immediately called for the chief executive to step down. Wong, 22, who received two separate prison sentences in 2017 and 2018 for his part in the Umbrella Movement pro-democracy protests in 2014, walked free after serving a reduced sentence of one month.

“[Carrie Lam] is no longer qualified to be Hong Kong’s leader,” he told reporters after his release. “She must take the blame and resign, be held accountable and step down.”