Have you ever been to a country that was under control of the Nazis and then Communism? Do you know what those people experienced and how they did not have any of the basic freedoms that Americans take for granted?

My wife, Pat, and I had that experience this summer. We started in Poland, the only country invaded by the Nazis that did not become complicit with Nazis. We learned of the centuries of invasions most often the Russians from the east, the Germans from the west and the Austrians from the south as explained in James Michener’s book Poland. Poland was partitioned four times and actually ceased to be a country for some 150 years until becoming a country again after World War II although smaller geographically. Although the territory was governed by others, the Polish people preserved their culture and their way of life tied to the soil primarily because of their Catholic faith and the values the families maintained.

Today, the Poles are proud of their heritage and despise any confusion people have thinking the Nazi concentration camps, like Auschwitz, were in anyway Polish except that thousands of Polish Priests, Nuns and those in the resistance were murdered there.

The Poles sought freedom from the Nazis. The Poles detested the occupation by the Communists who did all that they could to destroy the family, eliminate the Catholic Church and force abortion on the people as a form of birth control. It was through the leadership of Pope John Paul II, the first and only Slavic pope, and his combination of effort with President Ronald Reagan that the Berlin Wall came down and Communist governments in Eastern Europe lost their control in 1989. We found the Poles love America and Americans and are grateful for the assistance provided by President Trump to Poland. Poland is an essential ally for America and our future.

We next went to the Czech Republic (CR) and Slovakia. We learned in Prague (CR) of the contributions of the Czech people to cultural development particularly the music of Mozart and Beethoven, and to the preservation of early books and medical science. We learned in Slovakia of the conversion of the Nazis war machine plants to automobile factories where some 11 brands now are manufactured and next year a car that becomes an airplane will be manufactured and marketed internationally. In both the CR and Slovakia people said, we will not return to Communism.

In Hungary, we went to Budapest and learned it is two cities, Buda and Pest. It is amazing how these cities have rebuilt and continue redevelopment. 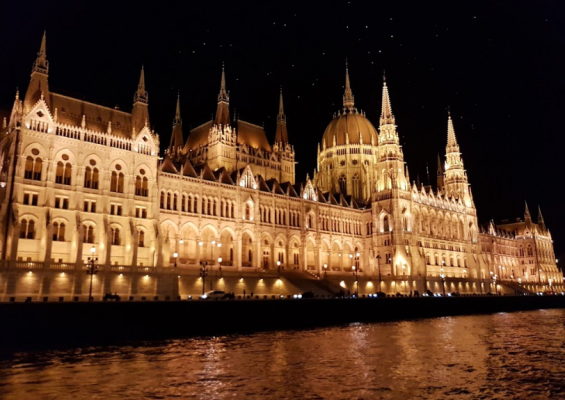 I’m sure you’ve seen the riverboat ads showing the Hungarian Parliament building. It is even more beautiful seeing it in real time. The square in front of the Parliament is where in 1956 the Hungarian revolution against the Communists started. (I personally remember the news telling of the slaughter of civilians).

There you can still see the bullet holes on many surrounding buildings (left there for visitors and future generations to see the evidence of where the massacre took place). The Russian troops blocked every exit with tanks and mowed down the peaceful unarmed demonstrators by the thousands. There is still one building that was occupied by the Communists left unrenovated to show the total lack of maintenance and repair for property Communists controlled. Remember, this was 1989 when Communism fell in Hungary – just 30 years ago. The people speak openly of never wanting to go back to Communism.

Our visits to these countries were so important for us to be able to learn of the unanimous desire never to return to Communism.

When we hear and see the people in America lauding Communism, I hope they will go study history. If they don’t learn history – history will repeat itself. I’m sure you know you can get the 45-point Communist Plan to take over America online. I have read it. Today, it’s called SOCIALISM!

Timothy Von Dohlen is the founder and president of the John Paul II Life Center and Vitae Clinic in Austin, Texas. (www.jpiilifecenter.org). He may be reached at tim@tvdg.com